Currently planned to launch on February 12th is a new feature - Global Explorer (Journeyman's Speed). This feature rewards you with a boost to your run speed (or a boost to other movement related abilities for a few classes that already have boosted run speed). To earn this reward, you must explore the amazing world of Norrath far and wide!

Every zone in Norrath will now have an explorers achievement for entering the zone. This may sound (and for most probably is) pretty overwhelming, but it comes with a great reward (as if exploring all of the magic Norrath has to offer wasn't enough of a reward!). Here is a reward list, as posted on the EQLive boards by Dzarn:


Quote Dzarn:
"There are a total of 5 ranks that have the following effects:


The system works like this: Each expansion (minus Call of the Forsaken) has an overall explorer achievement, and the base "EverQuest" achievement section contains 1 as well. You earn completion of each expansions achievement by exploring all of the content within the expansion (simply entering each of the zones). The first time you complete one of these achievements you will receive a Journeyman's Compass: 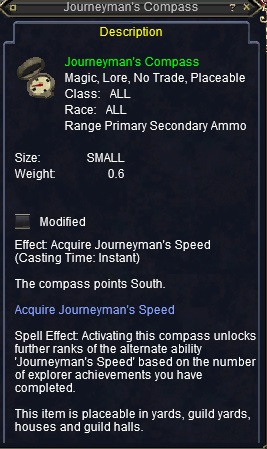